Pasir Ris 8 is an integrated mixed-use development that is a joint venture project by Kerry Properties and Allgreen Pte Ltd. A 99-year leasehold condo that is strategically located next to Pasir Ris MRT station, along Pasir Ris Central road.

Already known and loved for its parks and recreational facilities, the town of Pasir Ris will undergo further enhancements. Providing the future residents a wide range of exciting amenities and a potential of investment and owners. With the Pasir Ris MRT station at your doorstep, residents of Pasir Ris 8 can enjoy instant access to train service on the East-West Line. 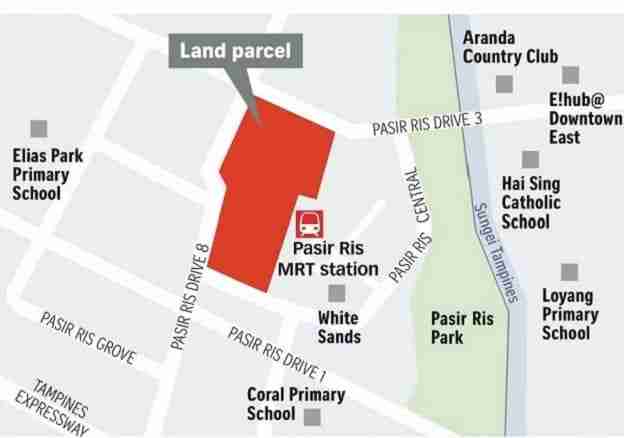 A short ride for those who work near Changi Airport, or a direct train route to the Raffles Place CBD area within 40 minutes. The East-West Line also has a number of interchange stations, enabling residents to easily link to other parts of Singapore and save time on their commute.

The Pasir Ris 8 will be integrated with the future Cross Island Line (CRL) to provide a seamless connection to public transportation and amenities for the residents.

Targeted to be completed by 2030, CRL will offer commuters in Pasir Ris an alternative to the existing East-West Line and connect to other major lines to serve as a key transfer line.

Residents can easily access to key business areas, the CRL will serve the upcoming smart town Punggol Digital District, which will includes the Singapore Institutute of Technology’s new campus. Once the upcoming Integrated Transport Hub near Pasir Ris 8 is completed, it will boast a major bus interchange for the area, and provide convenient linking pathways to Pasir Ris MRT station, which will be serviced by both the existing East-West Line and the new Cross Island Line (CRL) come 2029.

The Allgreen Properties and Kerry Properties tie-up’s unit land price based on a lower gross floor area of 832,480 sq ft, excluding the public facilities, works out to S$840.86 psf ppr, a spokesman for Allgreen said when contacted by The Business Times.

The Kuok Group real estate arm in Singapore is Allgreen Properties Limited. Incorporated in 1986, Allgreen was listed on the Singapore Stock Exchange in May 1999 and was then majority owned by the Kuok group. It was delisted in August 2011 from the Singapore Stock Exchange following its compulsory acquisition by Brookvale Investments Pte Ltd (which is itself part of the Kuok group of companies).

Today, Allgreen is one of the largest property groups in Singapore reputed for its quality products and track record of strong take-up rate for its projects. As at 31 December 2014, the Allgreen group has 35 subsidiaries and 13 associated companies. Although Allgreen began operations in 1986, the history and track record of Allgreen’s property-related businesses can be traced back to the times when it started as a division of Kuok (Singapore) Limited in early 1980. ​

In Singapore, Allgreen has a diversified portfolio of properties comprising residential, retail and office space, serviced apartments and a hotel. Allgreen’s portfolio of development properties consists of a mix of condominiums, terrace and semi-detached units. These properties are on freehold and 99-year leasehold tenures. Allgreen purchases land from private parties and participates in land tenders called by the Government to selectively and continuously maintain a landbank.